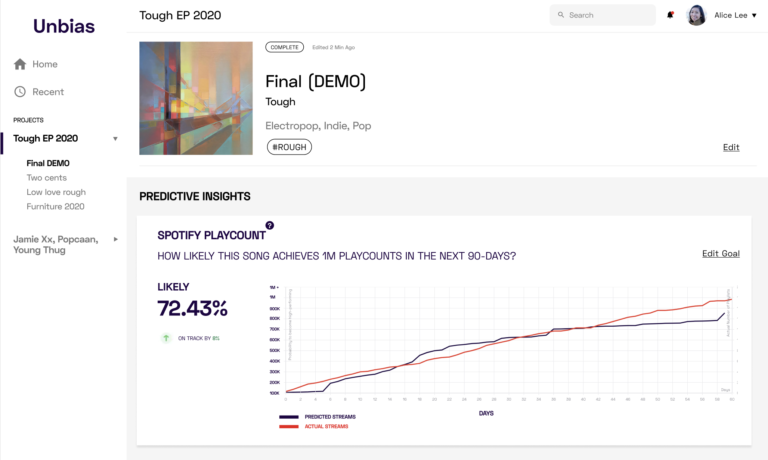 We’re releasing new AI models, including API access to Unbias. Unlike most music analytics products designed for post-release tracking, the new models will provide a suite of streaming forecasts on Spotify, YouTube, and TikTok, allowing you to estimate revenue before release, effectively becoming pro-active.

Since our beta launch in November, the feedback has been overwhelmingly positive since our customers receive pre-release estimations used in strategy meetings or marketing plans, and we also received some concerns.

Initially, we calculated streaming numbers by modeling the trajectory of songs added to the user and editorial playlists on Spotify. While this method was accurate for estimating streams, label owners and artist managers voiced challenges because of the lack of control over playlists.

After hearing feedback from our customers, we have developed an approach that takes streaming metrics directly. The new models do not use playlists as a proxy for streams. We have also added estimates of music video views on YouTube and TikTok to the model.

At Unbias, we believe a model is a simplified version of the truth, and that’s a risk because it can also mean that it’s not true, but if it’s true “enough”, it can give you predictive power, the ability to see into the future, and a much better understanding of the past. That’s something you can bet on because it’s much better than 50/50.

The field of AI in music is progressing rapidly, meaning there are frequently new applications. With our API, we are including general-purpose audio feature extractors so that you can use them on any tasks related to music like powerful music recommendations. Additionally, you could develop a similar forecast model like ours or help us explore the strengths and limits of this technology.

These new updates with the addition of the API have pushed us to sharpen our focus on developing general-purpose AI technology in music. We now hope that the API will greatly lower the barrier to producing beneficial AI-powered products, resulting in tools and services that are empowering creators and people who support them.